Following a rollercoaster year, Gavin James has announced details of his only headline Dublin show in 2016 when he performs at Dublin’s 3Arena on Friday 9 December. 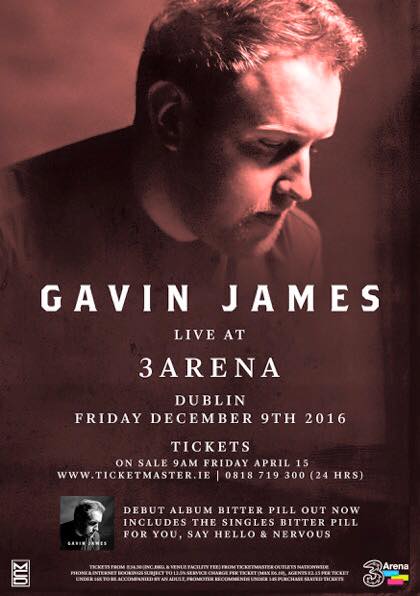 Tickets €34.50 (standing) / €39.50 (seated) incl. booking & facility fee are on sale at 9am on Friday 15th April from Ticketmaster outlets nationwide and online at www.ticketmaster.ie

2015 was a bit of a blur for Gavin James. He lost count of how many gigs he played, couldn’t say how many countries he visited and hasn’t a clue how few days off he got. The highlights, however, he will never forget.

Signing to a major label in January was the first. Seeing the live album he’d recorded at his local pub Whelan’s for next to nothing take off across the world was another. Supporting friend and fan Ed Sheeran for two nights at his hometown’s huge Croke Park (75,000), spending the summer supporting Sam Smith in the States and opening for Taylor Swift in Hyde Park were among them. There was sizzling on stage at a sun-soaked Red Rocks, a concert in South Carolina where the size of the crowd scared him and selling out his debut New York show at Mercury Lounge.

Last year was a blast, but it was only the beginning for the toweringly-tall, down-to-earth Dubliner whose heavenly voice, heart-warming, spine-tingling songs and habit of jumping in to audiences to start sing-alongs has won him an army of fans around the world. 2016’s schedule is already full. The sold-out shows – headline this time – have already begun, with a three-night run at Dublin’s Olympia Theatre – as has platinum Top 5 sales for his debut album, Bitter Pill, in his native Ireland, where he was awarded Song Of The Year for the album’s title track at the Choice Music Prize.

And now comes Bitter Pill’s global release. Several of its songs will be familiar to fans of Live At Whelan’s, the intimate live album the singer released at the start of last year as a calling card, but didn’t expect to connect beyond his homeland. On Bitter Pill, those songs have been given the grand setting and loving attention they deserve. Gavin’s raw delivery remains, as does his powerful falsetto, but now there are strings, choir-like backing vocals and electric instruments that add drama to the uptempo tracks.