“When it comes to music, I want to be able to be all that I am without hiding, without fighting with myself.  We’re already in what feels like some kind of global claustrophobia – we’re locked in and we need to come out and we need to break out. That’s what this music is to me and I just want to share it. I want people to feel free.” – Laura Mvula 2021

Pink Noise has seen critical acclaim across the board, NME’s ⅘ star review hails the record as being “steeped in liberation, not bitterness – it isn’t just a heartening comeback, but an absolutely sparkling pop album”, and The Sunday Times Culture name ‘Pink Noise as their ‘Album of the Week’ saying, “the classically trained Brum composer and songwriter sashays through a sequence of songs that affirm her position as one of this country’s most distinctive artists” Loud & Quiet praised the album’s “sparkly synths, super-tight rhythm section and huge production” with MOJO’s 4 star review calling Laura “a gifted arranger with a distinctive cri de coeur and this is where she soars”.

‘Pink Noise’ explores a side of Laura previously uncharted.  As triumphant as ever, the album is a battle cry and stark reminder of the sheer talent of the critically acclaimed artist.  This is Laura in a new found light – still reflecting her distinctive signature sound but showing the progression of an artist who has come into her own.    It’s an album borne out of both intense struggles and the positive realisations that come when you emerge reborn on the other side. Lyrically it touches on ideas around break-ups – both personal and professional – but also a hard won appreciation.

It’s all there on the album’s delicious lead single, ‘Church Girl’, an 80s-era Whitney Houston-esque slice of effortlessly euphoric pop that turns the spotlight inwards while careening towards the dancefloor. “I was the original pop head in my family, I’m obsessed with pop,” she says, acknowledging the shift from the more experimental, baroque soul of her first two albums, 2013’s Sing to the Moon and 2016’s The Dreaming Room, both of which were Mercury nominated. “For some reason when I made Sing to The Moon that sound became permanently attached to me in people’s heads. Like having the same hairstyle for the rest of your life, which for me is unthinkable. So this album was such a release.”

Dreaming Room won the coveted album of the year award at the prestigious Ivor Novello awards, an accolade that gave Birmingham-born Laura – a classically trained musician, hope for her future in music. Suddenly she had time to look back on how she was perceived, and to look at the bigger picture. “Growing up my parents always said to me and my siblings that as young black people we were going to have to work a hundred times harder just to get in the room, and that for me meant literally attempting to create a new genre of music,” she says. “So if I was going to do this thing I was going to have to invent something to go ‘hey, I’m here’. I was learning that I was perceived as this artist who was very ‘special’ and it was ‘pop but it’s not pop, it’s jazz but it’s not jazz, it’s classical but it’s not classical, it’s black but it’s not black’. I realised that a lot of this game was about justifying being in the room in the first place. Because I was doing something that couldn’t be neatly boxed. With this new album there is something hugely relieving about leaning heavily into a style of music – that 80s cosmic landscape – that has always been in my spirit.” 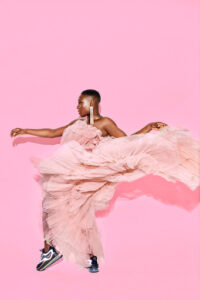 Contrasting confessional lyricism with compelling and infectious synth pop, ‘Pink Noise’ feels completely and uniquely Laura.  Her artistic prowess knows no limits – take the neo-soul meets art pop of ‘Remedy’ for example, or the darker, pulsating ‘Conditional’ that injects bombastic funk into indietronica. She feels rejuvenated too, especially on electro pop stunners ‘Magical’ and ‘Before The Dawn’. This is Laura Mvula at her most ambitious to date, leaving no stone left unturned in this cosmic new realm.

Laura says, “This is the album I always wanted to make. Every corner is made warm with sunset tones of the 80s. I was born in 1986. I came out of the womb wearing shoulder pads. I absorbed the dynamism of the 80s aesthetic right from my first moments on this planet. Wrestling with identity seems to be one of the rites of passage of the established artist. Making ‘Pink Noise’ felt like the most violent of emotional wrestling matches. It took 3 years of waiting and waiting and fighting and dying and nothingness and then finally an explosion of sound. As if it was always here this record is my most honest and unapologetic flying of the freedom flag. In my adult years I had forgotten how important dance was to me as a vital tool of my creative expression. I brought it back, just for me, so I could find my delight in dance again. And now I can’t stop dancing. I can’t wait to play this album live.”

As one of the most exciting musical talents to come out of the UK, Laura has previously won an Ivor Novello Award for Best Album, has been nominated for the Mercury Prize (not once but twice), BBC Sound Poll, the BRITs Critics Choice Award, two BRIT Awards in 2014 (British Female Solo Artist and British Breakthrough Act) and won an incredible two MOBO’s in 2013 (Best Female and Best R&B/Soul).

Having caught the attention of her musical hero Prince while performing for the first of two times on the Pyramid Stage at Glastonbury, Laura has gone on to travel the world, selling out shows and captivating crowds at every destination. Crowned “Queen of the Prom” and given a five star review from the Evening Standard for her Proms 2014 Late Night performance at the Royal Albert Hall, Laura’s critically acclaimed career has led her to work with real-life inspirations Nile Rodgers and touring with David Byrne.

Laura will be celebrating the release of her new album with a headline show at London’s Village Underground September 2nd. Tickets here.